ALL YOUR COOLING NEEDS UNDER ONE ROOF

In the last issue we looked at Safety when Brazing. This month, we move onto Adjusting Oxy-Acetylene Flames.

NOTE: Adhere to and apply all Safety Precautions!

NOTE: If correct amount of gas is used, there will be a clean flame, free from smoke, and it will be burning close to the tip of the nozzle.

If there is a gap between the flame and the nozzle tip when the acetylene is lit, there is too much acetylene. A dirty and smoky flame will indicate insufficient oxygen. 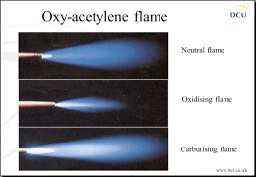 Open the oxygen control valve. As the pressure increases, a small white cone will appear centrally at the nozzle tip. The carburising flame will be indicated by a ragged bluish white feather surrounding the central white cone.

The carburising (or reducing) flame, is created when the proportion of acetylene in the mixture is higher than that required to produce the neutral flame. A carburising flame has an approximate temperature of 5500°F (3038°C).

A reducing flame can be recognised by acetylene feather which exists between the inner cone and the outer envelope. The outer flame envelope is longer than that of the neutral flame and is usually much brighter in colour. As shown in the image above.

Use of Carburising Flame

With iron and steel it produces very hard, brittle substance known as iron carbide. This chemical change makes the metal unfit for many applications in which the weld may need to be bent or stretched. Metals that tend to absorb carbon should not be welded with reducing flame.

As the oxygen control valve is opened further, a neutral flame is obtained when it is possible to observe two distinct zones, the central white cone and an outer envelope. The white cone should be sharply defined.

The neutral flame as shown in the image above is produced when the ratio of oxygen to acetylene, in the mixture leaving the torch, is almost exactly one-to-one. It’s termed “neutral” because it will usually have no chemical effect on the metal being welded. It will not oxidise the weld metal; it will not cause an increase in the carbon content of the weld metal. As shown in the image.

The neutral flame is commonly used for the welding of:

If the oxygen control valve is opened further, a shorter flame is produced having an excess of oxygen. It will be possible to observe two distinct zones, the central white cone and an outer envelope. The white cone should be sharply defined.

The oxidising flame results from burning a mixture which contains more oxygen than required for a neutral flame. It will oxidise or” burn” some of the metal being welded. The outer flame envelope is much shorter and tends to fan out at the end; on the other hand the neutral and carburising envelopes tend to come to a sharp point. An oxidising flame tends to be hotter than the neutral flame. This is because of excess oxygen, which causes the temperature to rise as high as 6300°F (refer to the image above).

The Oxidising Flame is commonly used for the welding of:

Brazing is a joining process used extensively in refrigeration. A joint using one of the brazing alloys is the best method for insuring leak free equipment. It involves the use of filler metal with a melting temperature above 425°C, but below the melting point of the metal or alloy to be joined. The filler material (usually in rods) is a nonferrous (does not contain iron) metal or alloy.

Using an oxy-acetylene flame as a source of heat and a filler material of a copper and zinc alloy does the brazing in this element. When brazing, the strength of the joint depends upon the molecular penetration of the bronze filler metal into the surface of the base metal. Molecular penetration means that the smallest possible particles of each metal mix and form a bond.

In order to obtain the greatest joint strength, it is necessary for the metal parts to be closely fitted and for a thin uniform layer of filler metal to flow between the surfaces. The strength of a brazed joint is only as strong as the bond between the filler metal and the base metal.

Brazing is a very important industrial process. It is particularly valuable in jointing or repairing such metals as mild steel, cast iron and brass. It is used extensively in joining tubing and a variety of surface build-up applications.

Without the use of a flux, the molten bronze rod would form beads, which roll across a metal surface without sticking. It would be like drops of water slipping over a dirty window pane. It is therefore necessary that the base metal not only be clean but also free from oxides. Since oxides form so quickly on a clean metal surface, they must be removed by using a high quality flux so that the filler alloy can make a good bond.

Silver brazing is widely used for joining both ferrous and nonferrous metals. It is an ideal process for joining small precision parts, tubing, copper and brass fittings – another important use is for mounting carbide tips on cutting tools. It is still one of the major processes used in the fabrication of jewellery, air conditioning and refrigeration units, bicycles, aircraft parts, electrical and household appliances.

The flow temperature range of filler alloys for silver brazing

Joint design is similar to those used in other brazing processes except that all joints should have a large bonding area. They must also be closely fitted. Since the filler alloy is fairly weak, joint strength depends upon the close bond between the mating surfaces and the paper thin layer of alloy.

The best capillary action and joint strength is obtained when the alloy film is about 0,05mm thick. Further build-up of a bead does not add strength and lap joint designs prove to be the best for silver brazing.

The parts to be joined MUST be cleaned before a flux is applied. Fluxes will not spread evenly over heated unclean metal. This uneven spreading leaves bare spots over which the filler alloy will not flow.

Most silver brazing requires a good flux. During brazing, the flux begins to melt and dissolves surface oxides at about 425°C. Further heating to around 595°C causes the flux to become a clear liquid. Just above this point, the flux begins to flow and will allow the molten filler alloy to from a complete bond between the close fitted surfaces. Flux is usually applied by dipping the heated filler rod into the powdered flux. The flux will stick to the rod and transfer to the joint when the torch applies enough heat as brazing begins. Paste fluxes may be applied to the filler rod with a small brush.

REMEMBER: Adhere to and apply all safety precautions

The same method is used for joining two copper pipes as in silver soldering with the exception that a copper-tech / copper-alloy rod is used. These rods are inexpensive in comparison to silver solder rods. They also do not require the use of any flux. The copper rods can only be used to join copper and no other material.

Repairs can be made in aluminium components using special solders. These are low temperature solders and are used at temperatures far below that of brazing or silver soldering. Many may be applied using a soldering iron or a handy gas torch. These special solder have a melting temperatures in the 200°C – 400°C range. When using these solders special fluxes are used and the manufacturer’s instructions should be adhered to.

This Sliding Bar can be switched on or off in theme options, and can take any widget you throw at it or even fill it with your custom HTML Code. Its perfect for grabbing the attention of your viewers. Choose between 1, 2, 3 or 4 columns, set the background color, widget divider color, activate transparency, a top border or fully disable it on desktop and mobile.
Page load link
Go to Top